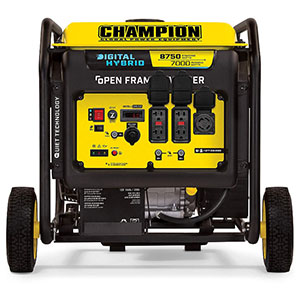 Champion Power Equipment is one of the best names when it comes to creating power generating tools. From inverters to portable generators, they have it all. Their most impressive line is the Digital Hybrid Series, and the Champion Power Equipment 8750-Watt open frame inverter generator is a prime example of that. The DH Series comes with features that make them great for backup, camping, and a host of other functions. The most popular ones are those that are RV enabled. For backup and running equipment with higher capacities, the most popular is Champion’s 100520 digital hybrid open frame inverter. It is a hybrid generator that excels in portability and can be used as a quiet power source. There are other features, pros, and cons, and they are all included in this Champion 8750-watt review.

It produces a clean sine wave with less than 3% total harmonic distortion (THD). It drastically reduces the THD level that traditional generators are known for. This means that you won’t get unstable power fluctuations, which are bad for sensitive gadgets and electronics.

Because of its open frame inverter design, it is economical and great for saving fuel. It runs on gasoline, and it takes 4.2 gallons to fill up the fuel tank. When the tank is full, the generator can keep running for 10.5 hours at quarter load and 5.25 hours at half load. It burns about 0.4 gallons per hour.

One of the best features of the Champion Power Equipment 8750-watt digital hybrid generator is the economy mode. The switch is located on the left side of the generator, and it serves many purposes. One of them is to conserve the use of fuel. With the economy mode on, the generator can run two more hours per the same amount of fuel.

One more benefit of the economy mode is that it reduces the noise from the generator drastically. The only downside to this feature is that the generator can’t handle as much load as it normally does.

One of the Champion Power Equipment 8750-watt DH inverter’s fundamental qualities is that it uses the popular Champion’s Quiet Technology. This means that the generator’s noise is lower than that of other regular generators of the same size.

With the use of an inverter design, they were able to make a quieter generator design. At quarter load, this beast is rated at 72 decibels, which is similar to a vacuum cleaner. Place it a few yards away, and you most likely won’t hear it from your house. The sound produced by the Champion 8750-watt DH inverter generator also becomes lower when the economy mode is switched on.

The Champion 8750-watt inverter is easy to use and set up. The assembly takes about 10 minutes. The generator comes in the same vibrant black and yellow color as the other DH Series models. It has a steel frame construction designed to withstand rough outdoor conditions.

At almost 150 pounds, the weight is lighter than that of other conventional generators of the same size. That said, it is heavy. For portability, it comes with two sturdy 8-inch wheels and a foldaway handle. While you can’t pick it up, you can easily push it around.

When it comes to control, the Champion 100520 inverter generator has four 120 volts GFCI AC outlets at 20 amps and one 120/240 volts twist-lock outlet at 30 amps. This means you can connect it to a house with a transfer switch easily.

There is also one 12 volts DC automotive-style outlet at 8.3 amps. It comes with battery charging cables and a dual USB adaptor. All of the outlets are covered and equipped with circuit breakers and a general AC reset button.

In addition to the outlets, it also comes with an Intelligauge. This tool monitors the voltage and the frequency. It can also indicate the total runtime so that the owner can know how long the generator has been working.

The led indicator lights are the last part of the control panel. They are located on the generator’s left bottom side, indicating low oil, overload, and output.

The Champion 8750-watt DH inverter comes with several improvements that benefit the user in the long run. One of them is the cold-start technology, which allows it to start up easily in cold weather and winter. The generator works with an electric start, which is very convenient. There is also a manual recoil starter on the generator’s side as a backup method to ensure that the generator can start up if the battery ever goes dead.

When it comes to emissions, the generator is EPA certified, and CARB approved. There is also a spark arrestor. It is designed to make the generator safe to use in forest areas and places where a fire may easily start.

To add fuel, there’s a fuel filler and a fuel gauge on top to help you monitor the fuel level. For the generator to work well, the muffler and the exhaust are located at the back.

For maintenance purposes, there’s a convenient cord for draining the oil from the generator. This cord is a sought after feature to prevent spillage when emptying old oil. The last is the oil fill, which takes up to 1.2 quarts of oil. This should be 10w30 conventional oil. When the oil level is low, there is a sensor that shuts the generator off.

The most popular of the DH Series open frame generators is the Champion 4000-watt digital hybrid inverter. It offers a starting output of 4000 watts and a running output of 3500 watts. A dual-fuel generator version from the same model is also available. Both the gasoline and dual fuel versions are plentiful for camping, tailgating, and using as a backup. The popularity of this particular product stems from its success with RVs.

An updated version of the 4000-watt DH series is the Champion 4250-watt digital hybrid inverter. It offers a starting output of 4250 watts and a running output of 3500 watts. This means it has the same rated power as the previous model but with extra surge wattage.

A new model from Champion Power Equipment DH Series open-frame inverters is the Champion 4500-watt digital hybrid inverter. It offers a starting output of 4500 watts and a running output of 3650 watts. It comes with the same features and fuel efficiency but has more wattage.

Next is the 6250-watt digital hybrid inverter like the other generators under the same DH Series category. It offers a starting output of 6250 watts and a running output of 5000 watts. It supplies a higher power output while being portable enough for camping and power on the go.

Finally, the Champion 8750-watt digital hybrid inverter is the latest version in the DH Series. It’s as large as inverter type generators can get. It offers a starting output of 8750 watts and a running output of 7000 watts. Its features and its numerous pros and downsides are included above in this article.

The Champion Power Equipment 100520 is a cost-effective open frame inverter generator that carries enough power to handle your home, job site, or travel trailer demands. With a rated wattage of 7000 watts, it’s as big as inverters get.

Champion Power Equipment was established in 2003. They are famous for manufacturing highly durable and dependable power generation equipment in the United States. Today, the company has sold more than 2 million generators that are capable of being used for camping and during hurricane seasons. Their customer support is also one of the best. So, if you have problems with your generator, you can quickly get professional help for it.

The Champion 8750-watt review is almost over. At this point, it is clear that the Champion Power Equipment 100520 Digital Hybrid inverter is truly revolutionary. Of course, it is not free of issues. However, many of the issues pointed out can be easily overlooked because of the numerous excellent qualities of this model. After all, it’s a cost-effective model considering its large capacity and stable power supply.