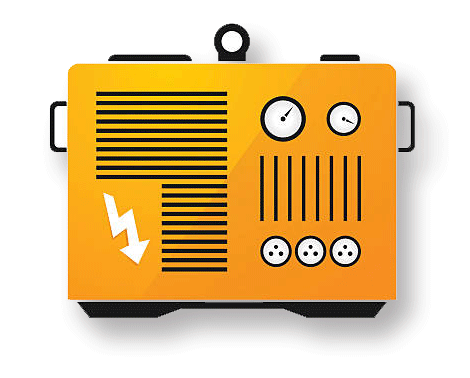 A generator is a fossil fuel-driven machine. It creates mechanical energy and converts it into electrical power. It consists of two main parts; an engine, and an alternator. When you turn on the engine, it causes the alternator to rotate.

This powerful rotating motion interacts with an internal magnet and copper wires and creates electrical power – typically 120V, 60Hz. Then that power is fed to the connected appliances and devices through the generator’s outlets.

A regular generator should maintain a constant speed of about 3600 RPM to generate the usual AC power. The generated electricity is useful to power most electrical devices such as lights, heaters, and various machines. However, when the engine fails to maintain the same speed. It causes dips and spikes in the voltage, causing power fluctuations that can make the power uneven.

For regular electrical devices such as lights, heaters, and other basic machines, this is not a problem. However, most electronic devices today use microprocessors components that can only handle specific voltages to work properly.

Power inverters invert already generated power. Their role is not to generate power. But to transform it. A power inverter is a device that draws power from a direct current (DC) source. Such as a car battery or solar power. Then uses an electric circuitry to ‘invert’ DC power into AC power. The result is adequately filtered AC power that is safe to handle sensitive electronic devices.

As a result, inverter generators produce clean AC power. You can use this kind of electricity to power any device. This makes them safer to use with sensitive consumer electronics. Such as laptops, smartphones, digital cameras, sound systems, and more.

Modern-day electronic devices house delicate parts that are sensitive to power quality. As a result, owning a sine wave inverter generator might make more sense if you need clean power for sensitive electronics. The sine wave refers to the flow of AC power from the generator. The smoother the waveform, the better the generated electricity.

Conventional generators produce square waves, modified sine waves, or irregular sine waves. On the other hand, microprocessor-controlled sine wave inverters generate electricity with smooth sine-wave characteristics. It is a high-quality power output with a waveform that is safe to use with sensitive electronics.

According to the Institute of Electrical and Electronics Engineers (IEEE) recommendation; the power that has a THD of less than 6% is considered good quality. The majority of inverter generators produce power with a THD under 3%. It is technically the same as utility grade power.

Read our in-depth article to learn more about how to make a generator suitable for powering electronics.

Regular portable generators tend to have an open frame construction. They come in various sizes. From a few hundred watts to over fifty thousand watts for commercial models. So it’s common to find portable generators weighing over 100 pounds. This is due to their large fuel tanks and large engines. They usually utilize wheels and handles to maintain portability.

On the other hand, one of the signature features of inverter generators is their smaller size. Most inverter generators have a well-designed, closed-frame housing. They may vary in size. But are generally around two to three cubic feet and often well under 75 pounds. It is not uncommon for an inverter generator to be light enough to be carried by its handle with one hand.

Parallel operation is a feature, which allows two compatible generators to be connected via a special cable. You can operate two generators at the same time as one power source and double the output capacity.

Generators have a bit of a trade-off. More runtime means a bigger gas tank, which means less portability. While conventional generators typically have larger fuel tanks. Portable inverter generators are much more fuel-efficient.

Conventional generators do have larger tanks and, as a consequence, can offer more runtime. However, they are not as portable and do not have the option to operate in a fuel-economy mode. An inverter generator with an economy mode can slow down the engine speed to match the load required by the connected devices. This allows it to burn fuel more efficiently.

On a traditional generator, the engine speed is fixed, and will always operate at full capacity, regardless of the load. However, on an inverter generator, the engine speed can be adjusted based on the load. This allows them to run at varying speeds to match the output. And burn only as much fuel as needed. As a result, inverter generators’ fuel consumption is 20% to 40% less than traditional generators. This further helps reduce the overall exhaust emissions and the noise levels. Since a generator is loudest when running at full load.

The noise level of inverter generators is probably one of the most notable features. Regular generators are usually quite loud and distracting when they operate. This is mainly due to their size, design, and constant operation at full capacity. On the contrary, this is not the case with inverter generators.

The average inverter generator is rated at about 60 decibels. Roughly the same noise level as a normal conversation. The noise level can even drop to 48 decibels on quarter load. About the same level as a whispered conversation. The quietest generators on the market are usually the inverter type. In comparison, conventional generators are rated at 70-100 decibels. The same range where vacuum cleaners are listed.

Inverter generators use advanced sound-dampening technology to keep the noise to a minimum during operation. They have an enclosed housing that dampens the sound as well as absorbs the vibrations of the motor. They are ideal generators for camping, RVing, fishing, hunting, emergency backup, and more.

While not suitable for powering sensitive electronic devices; traditional generators are overall a good power source for other equipment. They are bulkier and less portable. But offer higher power capacity and longer runtime. To compare the cost, generators are traditionally less expensive than their smaller inverter generators counterparts.

On the other hand, inverter generators are known to be considerably higher priced. Especially those for commercial purposes. This may be justified based on the power quality they provide. In addition to the parallel capabilities, low noise level, and portability. They might also be cost-effective in the long run, given their fuel-efficiency feature.

Inverter generators and traditional generators both have their place in the world of portable power sources. Through our best portable generator comparison, you can see which are the best in their class.

To conclude, it is for you to determine what your power requirements are. Do you need a generator with a higher capacity and longer run time?. Or one that can be easily transported?. If portability is not the case, did you check standby whole house generators?. Do you want to power sensitive electronics that require clean AC power?. Or more resistant electric devices?. Are additional features like fuel-efficiency or low noise levels vital to you?. Inverter generators vs conventional generators. Try answering these questions with the help of our post to find what fits your needs.